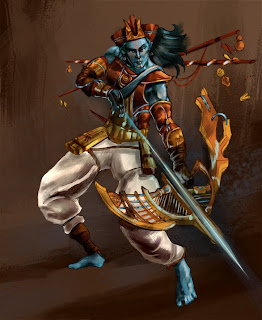 He will have none of it.
Posted by Unknown at 2:15 AM No comments: 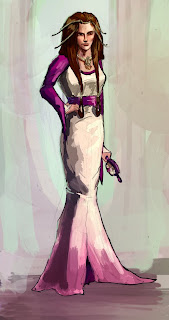 Color studies for the Queen and the Architect. I was supposed to have the Brother done, too, but that was a bit of a stretch. I'll make up the lost ground this coming week. 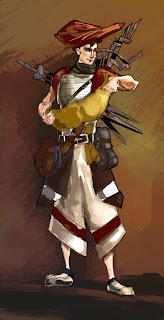 I have a tendency to noodle paintings a little too much, so rather than go for an overly-rendered-finished look -- which isn't the sort of thing you'd see much of on a concepting desk anyway -- I used no opacity control and instead went for bolder opaque strokes. Rama will likely be getting a similar treatment, I want it to stay fresh.
Posted by Unknown at 10:24 PM No comments: 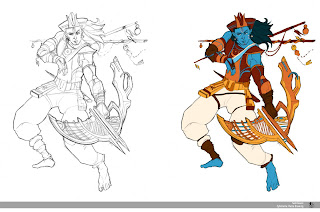 In class we decided on Rama design #29 with #28's bow. So here we go -- a tight drawing and also a color study. The painted version will be due next week.

Rama is supposed to be holding an arrow, but as it's a super-duper 'energy arrow' it's not drawn in. I didn't forget it!
Posted by Unknown at 10:47 AM No comments: 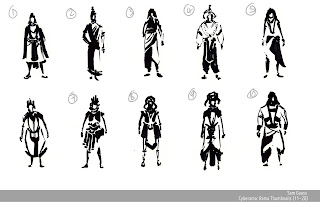 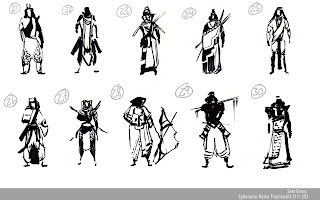 Thumbnail designs for Rama of a video game rendition of The Ramayana. I love silhouettes, so much fun and loose. These are each probably four inches tall. I use a black Copic marker for these -- I'm not usually much of a marker person, but for quick shapes like this the brush tip is fantastic.
Posted by Unknown at 12:09 AM 1 comment:

For those of you following my thesis, I am designing environments and characters and props -- essentially creating a concept art portfolio -- based on my take of a Brothers' Grimm story, The Glass Coffin. Here is a very quick summary of my version of the story, enough that you can see the characters and environments it centers around.


Once upon a time, an ARCHITECT who was fascinated with ancient ruins traveled to a distant world in search of a beautiful city that he had read stories of. Upon arrival, he found nothing but a huge wasteland, and in the distance what looked to be a solitary palace above a vast lake. In the wasteland he encountered an OLD MAN fighting for his life against two massive beasts, and rushed to his aid. Once the beasts had been slain, the architect began to ask the old man about the city. The old man brought the architect to a cliff overlooking the lake and palace, where the architect saw for the first time the reflection of a beautiful city that only existed in its mirror in the lake.

The old man told the architect of a QUEEN who had ruled the city, bound to it by an amulet, with the help of her BROTHER as an advisor. A NATURALIST traveled to them one day, and befriended both queen and brother, but then he slipped into the queen' bedchamber one night, and attempted to steal the amulet from her neck, hoping to take the city for himself. No sooner had he lifted it did the earth quake, for the amulet could not be removed from the queen without destroying the city. Alarmed, the queen woke, and her brother suspecting the worse stormed her quarters. But she feared the naturalist would try to kidnap him, being the one way to control her, and so she commanded her brother to flee. He did, and the naturalist sealed the queen in a glass coffin under a deep sleep while he tried to find a way to take the amulet, hiding her by burying the coffin within the castle. The city vanished into the ground and had not been seen ever since. The old man told he architect of this story, and asked for his help, the architect being much younger in years. The good hearted architect agreed.

Both men snuck into the palace, and tricked the naturalist into revealing where the queen was. To create a diversion, she put the amulet on the old man's neck, and he reverted to his youthful age, revealed as her brother. The three fled to the city, shaking at its foundation, while the naturalist pursued. The architect then took the amulet and placed it upon the naturalist's neck. The city was falling apart, and as it crumbled into rocks, it destroyed the naturalist along with it.

The queen and brother were saved, but the city was destroyed. The architect promises that he will help rebuild. The ending is hopeful and the story ends with a summon being sent for the villagers who had fled many years ago to return.
Posted by Unknown at 1:46 PM No comments: