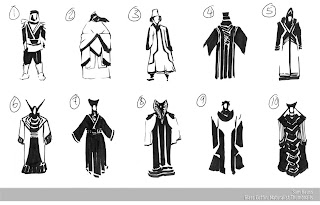 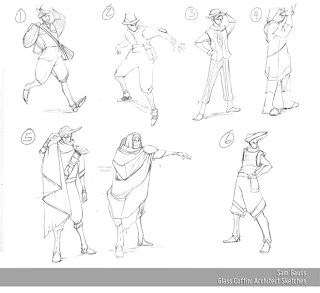 More tightened sketches, revisiting the Architect; some thumbnails for the Naturalist. Actual thesis work!
Posted by Unknown at 5:49 PM No comments: 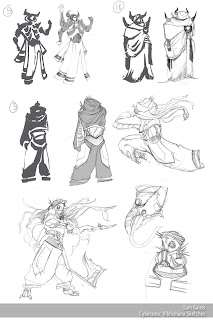 Took three of the thumbnails that were the best from the last post, and sketch-elaborated on some of them. Also an excuse to draw headwraps - who needs faces? The bottom figure is an idea for Vibhishana "unfurling" so to speak, for fighting. As well as looking at scary life-support systems, I was trying to research character profiles that I found particularly disturbing. Cthulu was the most prominent inspiration, haha.
Posted by Unknown at 8:13 PM No comments: 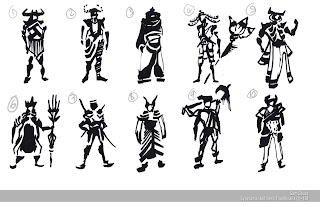 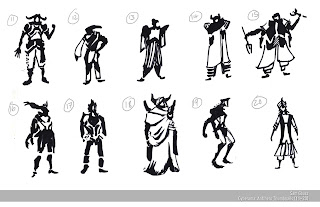 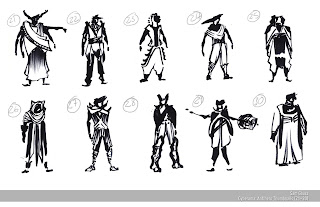 This character serves as a foil to Rama, a demon that is more human than most, to be relatable to the player. Vibhishana is skeptical of Rama's ability. Vibhishana also represents what Rama could achieve if he underwent the augmentations of the demons he fights; but he is twisted, not seeking to help out of protecting humans but because he does not like Ravana. Motives likely more complicated like in any good RPG. 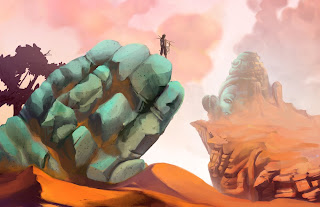 In Illusionism, we're working on rendering monumentality, or in other words how to scale objects. I asked if I could just keep working with my Rama environment, so I'm applying critique that I received Thursday to it as well. Not sure how I feel about it at this point, but I learned a lot doing it, which means it was a success regardless!

It'd be excellent if I could revisit my thesis backgrounds for the illusionism finals.

Speaking of thesis. Hey, remember that? Don't worry, there will be an update soon.
Posted by Unknown at 6:54 AM 1 comment: 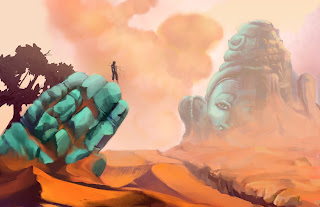 whoooosh
Posted by Unknown at 11:25 AM No comments:

It's been a long time since I updated, and I'm sorry about that. I do have a few things at least. First, work for my thesis: 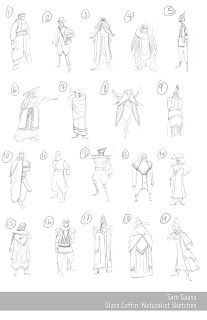 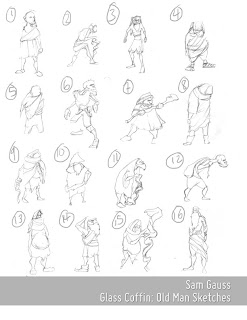 These sketches are for the Old Man and the Naturalist/Antagonist. I'm not too happy with either of these sets, though I do think I will steal one of the Antagonist thumbs (#2) and use it instead for my Protagonist. Some of the critique I got on the old Architect/Protagonist was that it was too busy, and I have to agree. I was not too happy with him anyway. But I like this guy, though I need to figure out a way to make him visually interesting since he's very recognizable with Western trends.

With both sets overall though, it's helpful because I am at least getting somewhere. I'm also trying a new way of thumbnailing where I focus more on interior detail than outside silhouette, while starting with the blue pencil (removed in Photoshop) to figure out basic shapes.

And for the other project, a repaint of Rama -- critique that I received was that he'd lost some of the energy in the drawing, and gotten too muddy. 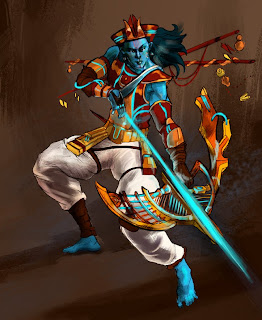 And and -- the assignment that was due this week. An environment 50%/ish done! 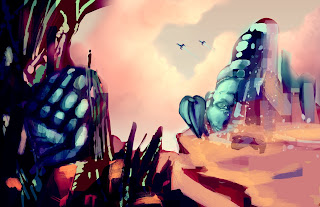 Whew!
Posted by Unknown at 3:00 PM No comments: